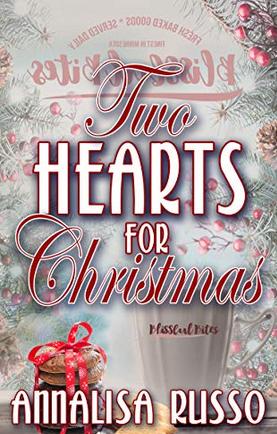 Maisie scrubbed at her eyes. It was after midnight and her holiday breakfast bread wasn’t finished. Why had she decided on such a complicated recipe? She had plenty of other holiday choices that would have sufficed. She shook her head. No, something simple or ordinary wouldn’t wow the judges of the Three Counties Christmas Bake off no matter how delicious it was. Not with a five-thousand-dollar prize going to the winner.

She gave her creation one more cursory glance, sent up a short prayer. She shoved the artisan bread into the oven. In twenty-five minutes, she’d either have a winning concoction or a dud.

She dusted off her hands on her apron and scrutinized the mess on the stainless-steel island. She shouldn’t leave it for Margo to clean up in the morning. Heaving a sigh, she capped the sugar and flour containers, and was headed for the sink when the outdoor security lights lit up. If that was another racoon heading for her garbage, he’d better have a change of heart.

Her nocturnal friend had raided her garbage until she’d bought brand new cans, secured them to the ground so they couldn’t be tipped, and removed her birdfeeders. She also bought a

live trap, which was now baited with marshmallows, evidently the bait of choice as racoons loved sugary foods. She crept to the door window and pulled the curtain aside, only to jump back at the sight of someone who was definitely not her furry friend.

“Hi, Sheriff. Come on in. I thought you were the pesky racoon I’ve been trying to trap for a few weeks.” Maisie stepped aside.

“And you couldn’t tell the difference?” Wade took off his hat, tipped the snow off before he entered, and then plopped it on the island.

“I heard some noise and then the lights came on. You could have been a racoon.” She pushed up the sleeves of her long-sleeved T-shirt sporting the Blissful Bites Bakery logo and strode to the sink with the first the bowl. “Would you like a cup of coffee? I think there’s at least one more cup in the pot that’s still drinkable. But it’s decafe.” She nodded her head toward the large coffee pot on the counter. Why did the man have to be so handsome? He sucked up all the available air in the kitchen. “So, what brings you out at this hour?”

“A disturbance at The Tricky Duck.” He sauntered over to the counter and poured himself a cup. “Stayed at the office until Nate came in for the night shift.” He waved a hand around. “What’s all this? You’re closed tomorrow.”

Maisie turned her head so she could answer and continue washing. She set the first pot upside down on a towel on the stainless-steel counter. “Did you hear about the Three County Bakeoff?”

“Yeah, taking place over in Portland, Community College gym?” He cocked a head. “Did you enter? I heard the prize was worth the trouble.”

“Yep. Five thousand dollars, and I play to win.”

“Planning on taking a fancy vacation?”

“Nope. I need a new walk-in cooler, and I’ve got my eye a real good used one. Five thousand dollars would go a long way to making that a reality.”

“What’s wrong with the one you have?” Wade leaned back against the island and sipped

“Nothing, right now, but I’ve had it repaired several times since mid-summer and the last repairman didn’t think it could go another six months.” She turned back to her suds. Darn it. Why did the man always look so appealing? Tall enough for her five-foot nine frame, completely male, with a soft side when it came to kids. And when she fixated on those big hands…

“Doesn’t the mayor own this building?”

“Yes, but if he has a chance to sell it for a good price, he’ll do it in a New York minute. He doesn’t want to put any money into something a new owner might not need. So, he continues to fix this one hoping a buyer for the building will come along. In the meantime, I go home every Saturday hoping the unit won’t fail during the night, and I walk in Monday morning to a food disaster.”

She set the next bowl on the towel and picked up another. She shot him a small furtive glance. Sure, they’d had a few dates…last Christmas for the tree lighting, and once more after that, but then she got busy and so did he, and time went by. Now it was just awkward when they met or tried to have a conversation.  “How’s your mom?”

Wade put his cup down and picked up one of the towels hung over the oven door handle. He started to wipe the first bowl.

“You don’t have to do that, Sheriff. I’m just waiting for my contest entry to finishing baking, then I’m headed upstairs. The kids are asleep.” She glanced at the bedroom monitor. “The rest can wait until Monday morning.”

“Wade, not Sheriff.” He rubbed the towel over the bowl. “I’m used to doing dishes. The old homestead doesn’t have a dishwasher. My old man always said if a woman needed a dishwasher, she was lazy.”

Maisie hid her inclination to make a face. It was common knowledge Wade’s mother had a difficult marital situation. Not that his father had been an abuser, but he hadn’t been an easy man to live with. She remembered him from her teenage years and how the Sheriff Frank Bennett had taken a hard line on the young boys of Green Earth. When Wade took over after his father’s death, Maisie feared he would follow in his father’s footsteps. But he turned out to be completely different.

“Your mom?” Maisie asked again. Each week, she tried to make time to deliver Wade’s mother a few pastries at Equinox HealthCare. She didn’t know if Vera Bennett realized who left her the treats, but it didn’t matter. Her mother and Vera had been friends. She liked to think of them together up there someday.

Wade walked the heavy bowl over to its place on the open metal shelving. “She’s…good. The doc said she’s comfortable and…as good as she can be. Her sister is coming for the holiday from South Carolina. Aunt Amelia will stay with me at the house.”

The buzzer on the stove went off, and Maisie jumped. She quickly wiped off her hands and grabbed a couple of potholders. Her heart missed a few beats as she strode toward the oven to check out her contest entry. There wouldn’t be time to create another. Wade set down his towel and opened the oven door for her and stood back.

“Jeez that looks good,” he said over her shoulder when she placed her entry on the island. He leaned over to get a good sniff. “It smells even better. I think it’s a winner.”

The crust was browned perfectly, the sugar crystals sparkled, juicy raspberries oozed from the creases, and the whole thing looked like a beautiful snowflake wreath.  Maisie felt a deep sense of satisfaction. It couldn’t have turned out any better. Now she could relax until next week when she’d need to come up with another recipe.

She elbowed him in the side. “You’re prejudice. You know the baker.” But she felt incredibly happy the way the festive pull-apart bread had turned out. Wade smiled broadly and a lone dimple on the corner popped out, highlighting the enticing mouth she’d yet to experience.