I’m excited to share this free excerpt of my new holiday book, All Hearts Come Home for Christmas, with you. The story had bounced around in my brain for over ten years when suddenly, one Sunday, on the road between church and Giordano’s Pizza, the story finally came together. While waiting for my meal, I feverishly scribbled a quick outline on a paper napkin! Crazy, huh?

Check it out! Let me know what you think.

Jillian Magee had it with Christmas. This was the last straw. Traditional Christmas carols on the radio, a freshly cut balsam curled with popcorn garland, the warming scent of a crackling hickory log, twinkling lights and mistletoe, and everything else that went along with the overall frivolity and joy of the season. Done. Period. End of story. 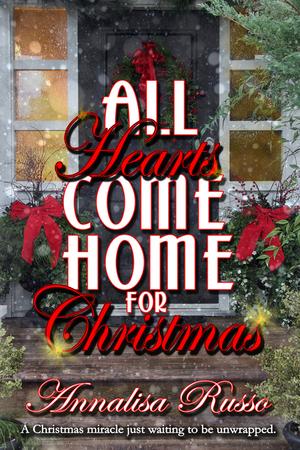 She stood at the threshold of her small living room in her flannel, dancing elves PJ’s and seethed at her inherited tabby cat and the mess he had made during the night. And after she’d given him an early Christmas present—a guaranteed-to-work, genuine leather, scratching post. He’d been ungallant enough to leave several small packages of cat puke wound in tinsel he’d eaten right off the tree. Antique Shiny Brite ornaments littered the carpet, her grandmother’s treetop angel bent over drunkenly, and one strand of twinkle lights dragged along the floor.

“BUUUSSTER,” she hollered, drawing out both syllables. “Get. Over. Here. Now,” she said punctuating the air four times with her index finger. “You’re darn lucky the Nativity set is still in the box, and when I arrange the crèche under the tree tonight, if you dare to touch it, I swear you’ll be toast.” Again, the finger.

Buster, known in some circles as Mr. McGillicutty, didn’t move. He eyed her with what appeared to be feline defiance, cocked up a leg, and proceeded to wash his private parts. The look on his furry face inferred, “No big deal. So, I got a little hungry during the night. Get over it.”

Jillian slid down the door jamb, sat heavily on the wooden floor, and lowered her head into her hands. Christmas was supposed to be perfect. Weren’t there twelve dozen homemade Christmas cookies in her freezer waiting to be boxed up for friends and family? Wasn’t the outside of her house decorated like the best Chevy Chase Christmas ever? Wasn’t everything on her gift list checked off—well…almost everything. So, why had the season started off on the wrong foot and continued to go downhill?

For starters, no snow. No snow angels, no snow forts, no snowmen. No snow at all in her little town of Green Earth, Minnesota. Yep, frozen ground, but not one iota of snow. And, with less than two weeks until her Christmas break from school, temperatures in the fifties. If that wasn’t bad enough, her entire family had decided they had other plans this year and left her to fend for herself, over Christmas, for cryin’ out loud. And she didn’t care one patootie about their excuses. Well, okay…they had good ones, but still.

And last, but not least, no boyfriend. Gone. MIA. The inscrutable Brian decided he needed to think about their relationship—over the holiday, in St. Croix. By himself. Are you kidding me?

She let out a long-suffering sigh, and after casting the evil eye at Buster, pulled herself up from the floor to shuffle back to her bedroom. The mess in the living room would have to wait. If she didn’t shower immediately, she’d be late for work.