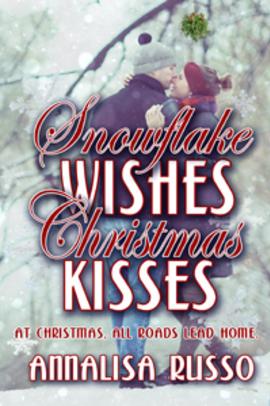 If there was anything more Christmasy than Green Earth’s Town Square Tree Lighting Ceremony, Cord didn’t know what it was. Even the weather had cooperated. A pleasant wintry mix of powdery flakes accumulated to form a thin blanket of snow over the town square and a small man-made, ice skating rink. Pine garland swaged over gingerbread cutwork on the gazebo while a giant nutcracker soldier stood guard to the right of its entrance. A horse-drawn sleigh was providing free rides around the four-block area that bordered the town square. A few groups of teenagers hurried to finish their version of Frosty for the best snowman contest.

And nearby, the star of the show, a towering balsam, commanded attention of young and old. Hand-painted ornaments hung from its branches, one from each classroom at Sheridan Elementary and Intermediate Schools and the neighboring high school. Cord figured the bulbs would be traditional multicolored with the same silver and gold star crowned overhead that he remembered from his youth. He and Vanessa had always snuck down to Town Square to attend the tree lighting. He always left with a bittersweet feeling after observing the dynamics of families who showed up with kids in tow—until he grew old enough and wise enough to finally put a name to the lack of substance in his own.

He dismissed the maudlin thoughts and nudged Giselle with his elbow. “This isn’t the date I had in mind.”

“Oh? What exactly did you have in mind, Mister McQuada?”

Giselle looked ridiculously pretty in her fur-lined jacket and knitted white cap pulled down low, to sit just above her brows. Her riotous caramel curls tumbled over her shoulders. “You, me, a crackling fire, a glass of the bubbly, and copious amounts of mistletoe.”

“Sounds very nice and maybe a little dangerous.” She laughed and then pointed to a group of children. A couple of thick-furred dogs were playing with toddlers bundled up like waddling penguins. “Aren’t they cute,” she commented, and then glanced around. “I think we lost our friends and their children. Where is everyone?”

“Hanna is over there,” he said, pointing, “watching her friends ice skate. I’m taking some grief for not providing her with a pair of skates, even though I didn’t know about the rink, a new addition since I lived here.” Hanna’s winter wardrobe was sadly lacking, too. She and her mom had to leave everything behind when they fled the cult.

“You’ll have to remedy the situation as quickly as possible. I remember skating on the rink a few times when I visited Mel for the holiday. I always had a blast.”

“Didn’t you spend Christmas with your parents?” After the words left his mouth, he mentally kicked himself. He didn’t want to ruin the mood by bringing up painful childhood memories.

She shrugged her shoulders. “My parents were busy from Black Friday through New Year’s. Until I started college, I usually spent Christmas with Grandmère in France. I met Mel my freshman year. She invited me to join her family here in Green Earth—until she left school to marry Brad in senior year.”

The little match girl syndrome again. He figured he’d better change the subject before the mood got oversentimental. He pointed to a couple walking side by side. “There’s Maisie with Sheriff Bennett. Are they an item now?”

Giselle thought it over. “I don’t think they’re exclusive, but there must be some interest there.” She shoved her mittened hands into her jacket pockets. “Now, I understand why Gaige was cranky all day at work and refused to go to the tree lighting ceremony. He must have asked Maisie to go and got shot down. He said he planned to stay back and work on the website, but I figure he’s probably pouting.”

Cord thought it served the jerk right. Let him go up against Sheriff Bennett. It might remove the target off his back. “So, what’s the plan. I know I don’t have you all to myself tonight.”

“Everyone meets at the gazebo for the tree lighting ceremony, then Cleo and the chorus perform and host a sing-along, really sets a holiday mood. Then, we meet at White Balloon for our own little party. I have Bûche de Noël, and Inès whipped up her famous Christmas punch, spiked for the adults. Sound okay?”

Her smile was infectious. He didn’t even mind sharing her with the rest of their group. “What? No figgy pudding? Thanks, but no thanks,” he said, avoiding her elbow to the gut.  He pulled back his sleeve to check the time. “We’d better head over now. It’s almost eight thirty, and we wouldn’t want to miss Mayor Crowley’s speech.”

He guided her toward the gazebo with a hand on the small of her back. He liked touching her even if it was through layers of clothing. He wanted more, but when he left Green Earth, what then? He didn’t want to leave town with bad vibes between them. But she looked so darn beautiful it took his breath away.

They were the first of their group to show up at the gazebo. Snow crunched under his sherpa-lined boots as he rocked back and forth. “Did you know if you make a winter wish on a snowflake it always comes true?”

Giselle smiled up at him. “How do you do it?”

“Like this.” He held out a gloved hand until several flakes landed. “You have to wish quickly, before the snowflake melts, or it won’t come true.”

“Like this? Oh, I got one, now…” She closed her eyes, and her lips moved silently. She opened her eyes and glanced at her empty glove. “Did I make it? Did I get my wish in before it melted?”

He held her gaze and moved closer. Her deep chocolate-colored eyes widened. “You did it perfectly,” he whispered, moving a soft curl from her forehead that had escaped the white cap. He dipped his head a little lower. “I’m going to kiss you, so if you don’t want me to, say something now.” Her gaze skimmed down, hovered around his mouth, lingered there. Then, a low purr sounded in her throat. She eased one hand behind his neck and pulled his mouth down to meet hers.

The feel of her lips yielding to his, the taste of her, slid through his system. He wanted to swallow her up in one big gulp, but his good sense fought with the roar in his head and won. He kissed her once more, lightly, to seal the deal, and then stepped back before he crossed a line and ruined everything. After all, they were in a public forum.

Someone behind his back cleared their throat discreetly. When he swiveled his head around, Ross Hollister clapped him on the back. “I see you made your move,” he said for Cord’s ears only.