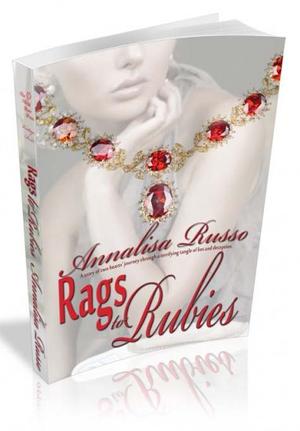 pretty as he is rich, but Grace has been down that road before.

Jared grew up an orphan and has guarded his heart for a very long time. Willing to admit he finds Grace tempting, he still plans never to marry. How can he trust anyone when his own mother abandoned him and gold diggers constantly throw themselves at his feet?

As the intrigue surrounding Grace leads them from Chicago's ethnic neighborhoods to the jazz and glitz of New York City, can they avoid romantic entanglement? Or will love change Grace's mind and open Jared's heart?

Thank our for joining our newsletter!

Annalisa Russo's breakout novel, Rags to Rubies, follows a mesmerizing tale of two unlikely allies and their harrowing jaunt from the ethnic neighborhoods of 1928 Chicago to the gilded world of New York City in a race against time.

Grace Hathaway is getting along just fine since her father's untimely death—until she is followed home one dismal night by a shadowy stranger. If she'd had another choice, she would never have approached the door of the country's most mysterious and wealthy man at four o'clock in the morning. Jared Dunstan de Warre III may be as