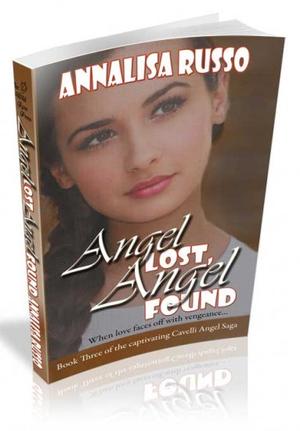 Gabriel Cavelli, the Harley-riding bad boy of the Cavelli family, has to honor a deathbed promise to a friend to look out for his young, educated-out-east daughter. Gabe, one of the three Cavelli boys named—or rather misnamed—after archangels, finds himself caught as he tries to rescue an unwilling damsel in distress from a crooked Prohibition man.

As more threats unravel, old enemies come out of the shadows and force Charity and Gabe to band together against decades-old dark secrets—and find safety in each other’s arms.

Annalisa Russo captures the hearts of the Cavelli Angel Saga with her third book, Gabriel Cavelli's story: Angel Lost, Angel Found, the final showdown where a dark secret hidden for decades comes to light to expose the shocking truth.

Charity O’Malley is about to break the law of the land in order to follow her dreams. They’ll call her a whisper sister. A tarnished female. A Jezebel. As a woman who wants to shape her own destiny, she’s about to reopen her father’s speakeasy, but Big Mike O’Malley reaches out from the grave to save his recalcitrant daughter from her folly.

Thanks for signing up!
View on Mobile