Sam Parnetti appreciated women, everything about them. They smelled better than his buddies, had softer skin, were sweet by nature, and biddable—at least the ones he chose for himself.

He appreciated all types, sizes, and any measure of beauty. Some had warm smiles, some had beautiful hair, and while some were tall and willowy, others were short and curvy. He appreciated the female form and routinely drew it as a source of income. Of course, the females he drew were a bit more endowed than in real life.

But the new one next door talking to Crazy Lady had possibilities. His first thought: her long, dark brown hair wasn’t bobbed—thank the Lord. His second, a woman with those kinds of curves could be dangerous. He’d gone a long time without a serious relationship. Jenny had cured him of thinking in terms of anything permanent, so he sought out girls who just wanted to have fun who, like him, wanted to keep things casual. Which meant nice girls were off the list. Besides, nice girls could break your heart.

He set the grocery bags on his new Formica counter and rummaged around inside one of them for the bottle of aspirin—the reason for the trip to the grocery store. He downed three with a long drink of water and rubbed the cool glass across his forehead. Maybe meeting Carl and Bryan at O’Rourke’s gin mill and getting ossified hadn’t been such a terrific idea. He had a cover due in two days for The Popular Magazine, and he’d yet to put brush to canvas. The first of the October issues would feature the American West, so he had to produce a cover with a handsome, virile cowboy and an attractive cowgirl to attract the buying public.

He watched from his bay window as his new neighbor made several trips to her old flivver for more boxes. She’d used a rubber band to pull her rich, brown hair into a thick tail at the nape of her neck. The bulky sweater she wore didn’t hide her generous bosom, nor did the worn trousers hide her delectable derrière. She was tall, endless legs; he guessed about five foot eight. Strong, if the way she hefted the heavy boxes was any evidence. He wished he could get a closer look, but from a distance, she appeared to be whistle bait. He wanted to paint her. Preferably with less clothes.

Sam’s attention was pulled from his new neighbor when his mailman strolled down the walk with a stack of mail and a small package. Sam met him at the door. “Hey, Fred, how’s it going?”

“Mornin’ to ya, Sam,” the man said tipping his uniform cap. He sorted through a few envelopes. “Gotta say, even with the clouds, sure is decent weather for mid-September. Must be at least seventy degrees today.”

“Great news for you,” Sam pointed out. Fred still wore the typical summer weather postal uniform—a neat, loose-fitting blouse of light-gray chambray with a dark tie instead of coat and vest. His badge number was set over the brim of his cap. The man had six nickel-plated stars set one half inch above the braid on his sleeve indicating thirty years of service. Sam figured Fred would be retiring soon.

Fred gave a chuckle. “Ain’t that the truth? But ya know, ‘neither snow nor rain nor dark of night’—”

“Yeah, yeah, tell it to Sweeney,” Sam interrupted with a wave of his hand. “We know how bad you guys have it.”

Fred laughed again and wiped the back of his neck with a natty handkerchief. “I got a package and some bills here for ya.”

Sam took the mail and stepped back. “Thanks, Fred. Don’t take any wooden nickels.”

As Sam shut the screen door and plopped onto the sofa to open the mail, he thought maybe he’d make himself a grilled cheese sandwich for lunch. Or better yet, maybe he’d go to Smiley’s Diner for Saturday’s meatloaf special and eliminate the need to cook. Not that he minded cooking. He even enjoyed the process occasionally. He and his brother had learned to cook at an early age, or they went hungry. Mom wasn’t exactly a whiz in the kitchen, not that she didn’t try, but her efforts usually involved burnt pans, dried out meat, and indistinguishable vegetables.

Flipping through the envelopes, one from his mother caught his eye. He sliced it open with one finger. The letter reported his father was out of the hospital and recuperating well. When the man had acute stomach pains and ended up in the emergency room, the whole family panicked. Luckily, the pain turned out to be appendicitis, not a heart attack, and the doctors operated quickly. He made a mental note to telephone his mother after lunch.

When he got to the end of his mail, he realized the paycheck for August’s two covers was missing. He took a minute to curse creatively. The check was two days late and his mortgage payment was due at the end of September. Next month, he’d pick up the check at the magazine’s downtown office to make sure he received his money on time.

Sam set the mail aside and picked up the small package Fred had delivered. He shook it; no rattle, and light enough to make him wonder if the box was empty. He almost tore open the brown paper when he noticed the box didn’t have his address on it, but one for the house next door. So…her name was Fioretta Delaney, and he already knew she was a biscuit. Maybe he should be neighborly and return her mail. What better way to meet her? It was like a sign from God.

Retta’s elbows were deep in soapy water when someone knocked on her front door. She wiped her hands on a towel tucked into her trousers’ waistband and strode through the living room to open the front door. And there he was—the neighborhood sheik.

Lord and butter. He was even better looking up close. Cool, intense eyes, dark brown, almost black, stared back at her. Same color thick hair with enough wave to curl at the collar of his worn denim shirt. A tough, chiseled face with a rangy build of lean muscle; six two, if she was a good judge, with the look of a barroom brawler—then he smiled. A tiny dimple appeared at the corner of his lip, and she felt her heart skip a beat.

“Hello. What can I do for you?” she managed, giving him a broad smile. It couldn’t hurt to be friendly.

“I don’t mean to bother you, but I live next door.” He hooked a thumb toward his house. “And I got your package by mistake today.” He held out a small box.

“Oh…thank you.” She took the box and then held out a hand. “I’m Retta Delaney.” He took her hand firmly, not like some men did when they shook hands with a woman, with a limp wrist.

“Sam Parnetti. You bought the place, huh? Finished moving in yet?”

“Little by little, but I’ll sleep in the house at night now.”  She gestured toward his house. “I see you’re working on your porch.”

He glanced over his shoulder. “Yeah, I’ll get it done some day. It’s not my top priority.”

Hmm…not overly ambitious. Still, Poppy was right, easy on the eyes. “So, what keeps you so busy Sam Parnetti?” And what pays for that beautiful new Duesenberg?

“I draw covers for The Popular Magazine.”

Retta sucked in a breath. “Don’t feed me a line. You draw all those fabulous covers?” She couldn’t believe her ears. She’d just quit working full time for her family’s grocery store to take a freelance position writing for the magazine. In July, the bi-monthly rag had accepted one of her short stories for publication in the second October issue, and her dream came true.

Sam shrugged. “Well, not all of them are mine, but enough to keep me in clover. I’ve been with them for two years.”

“Small world. I just signed a contract with the magazine for six installments in a serial I developed. The first excerpt will appear in November, in the first issue, more if the story line catches on.”

“No kidding? Congratulations. I’m doing the cover for the first October edition right now. I guess we have something in common.”

He smiled and the dimple popped out again. “The Mag’s not a bad place to work. I don’t spend much time in the building downtown, but if you have any questions—” He let the words hang there and took two steps backwards. “Well, I have to see a man about a dog…nice meeting you. I’m sure I’ll see you around.”

Retta held up the box and waggled it.  “Thanks for delivering my mail.”

“You’re welcome.” He shot her a grin that probably made most women melt into a quivering puddle, and taking the steps again two at a time, he disappeared around the corner.Not quite the fella Poppy described, Retta thought. She wondered what her new neighbor had against Sam Parnetti. She’d have to ask her in the morning over pound cake. She placed the small box on the half table in the foyer and headed back to the kitchen and her mountain of dishes. 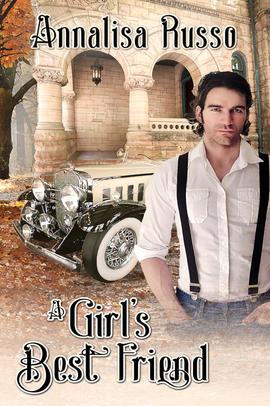